DEUTZ IS A PIONEER OF CARBON-NEUTRAL DRIVE SOLUTIONS. IT HAS THE RIGHT ENGINE FOR EVERY CUSTOMER AND EVERY APPLICATION, AND ALTERNATIVE DRIVE SOLUTIONS ARE A KEY PART OF ITS STRATEGY.

DEUTZ is pressing ahead with the development and manufacture of sustainable drive technologies for use on construction sites, in agriculture, and in transportation logistics. The leading innovator’s alternative drive systems are helping its customers embark on a new era of carbon-neutral mobility. The guiding principle is that there is always an appropriate solution for every customer requirement. 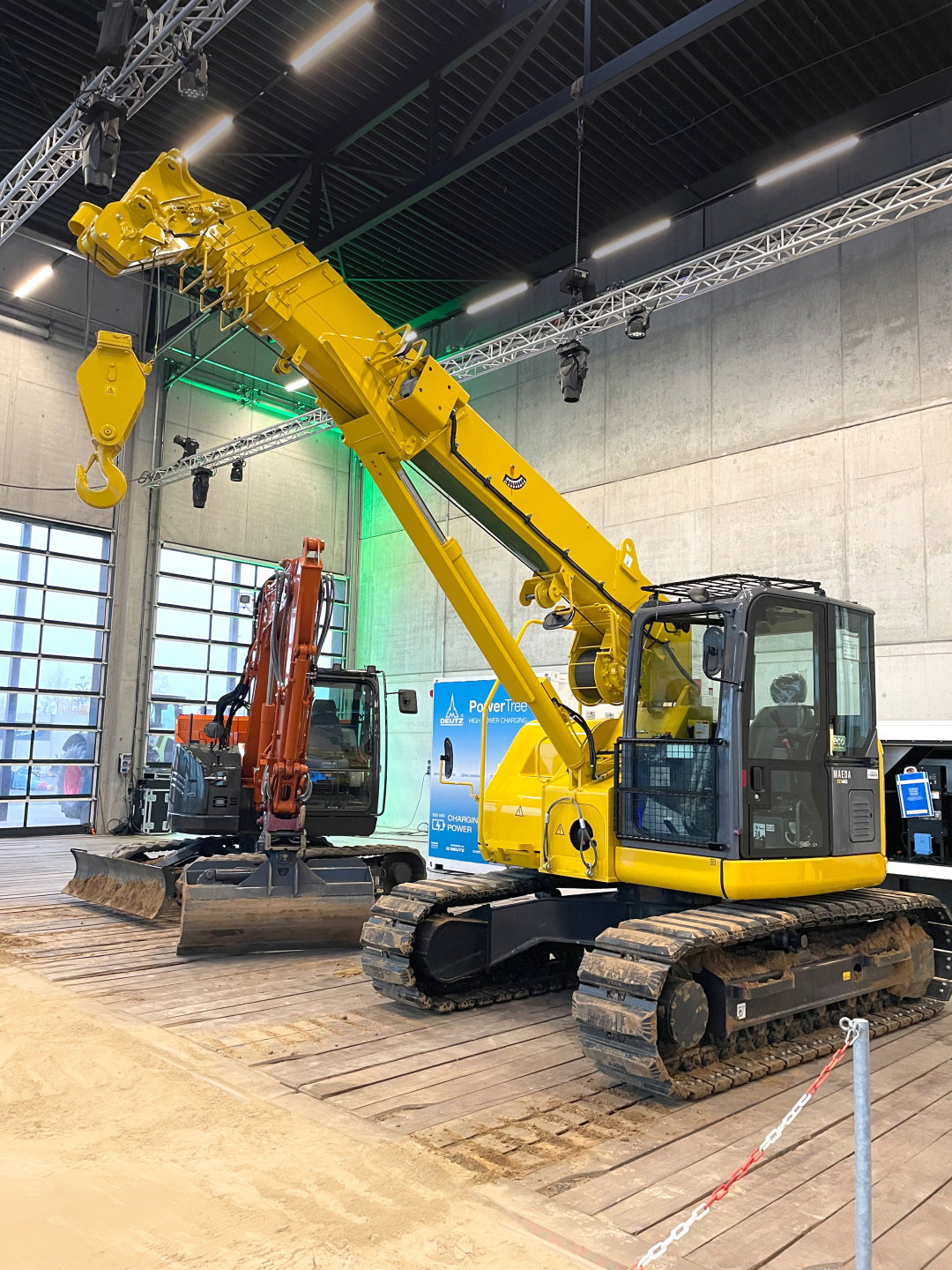 "The green construction site is not a vision of the future – it is reality.”

Dr.-Ing. Markus Müller, member of the Board of Management with responsibility for technology and sales

> The Maeda CC 1485 uses a 360 volt engine from DEUTZ, which is powered by a lithium-ion battery.

Making its debut in November 2021, the CC 1485 was the first all-electric crawler crane from Japanese manufacturer Maeda to be equipped with an electric drive from DEUTZ. The crane is fitted with a 360-volt DEUTZ electric drive powered by a lithium-ion battery and has a load capacity of six tonnes thanks to an output of 40 kW. “Environmentally friendly construction sites are now a reality, not a distant dream. The CC 1485 is fully functional. What’s more, our electric drive is quiet, efficient, and emission-free, even when used on a building site,” says Dr. Ing. Markus Müller, member of the Board of Management of DEUTZ AG with responsibility for technology and sales.

Tomiaki Habasaki, Executive General Manager – Industrial Machinery Headquarters at Maeda: “Maeda has already entered the Europeanelectric vehicle market with its spider crane. We are seeing growing demand from our customers for environmentally friendly products. We decided to collaborate with DEUTZ, a company renowned for its innovative technology and experience with electrified drives for off-highway applications, on the development of our electric crawler crane.” DEUTZ and Maeda showcased the vehicle at the bauma 2022 trade fair to a large audience of trade visitors. Full production of the DEUTZ electric drive is expected to begin in 2023.

Reducing emissions in the construction sector is a hot topic

“Power supply infrastructure is key when it comes to using alternative drive systems, which is why we have made it our mission to help our customers make the switch. The PowerTree from E-DEUTZ brings electricity to the vehicle. KTEG has joined us in taking a big step closer to carbon-neutral mobility,” says Dr. Ing. Markus Müller. KTEG, a manufacturer of specialist construction machinery, has great faith in the PowerTree. Following an initial pilot phase, the company has ordered more rapid charging stations from DEUTZ to supply their electric construction vehicles with energy on site.

Reducing emissions in the construction sector is a hot topic for our customers, which is why our portfolio includes both electric excavators and the PowerTree mobile rapid charging station. We aim to ensure that our electric machinery is ready for use throughout the day. It is equally important that it can be recharged in a short space of time. We are setting the benchmark, which benefits our customers,” says Harald Thum, CEO of KTEG GmbH. 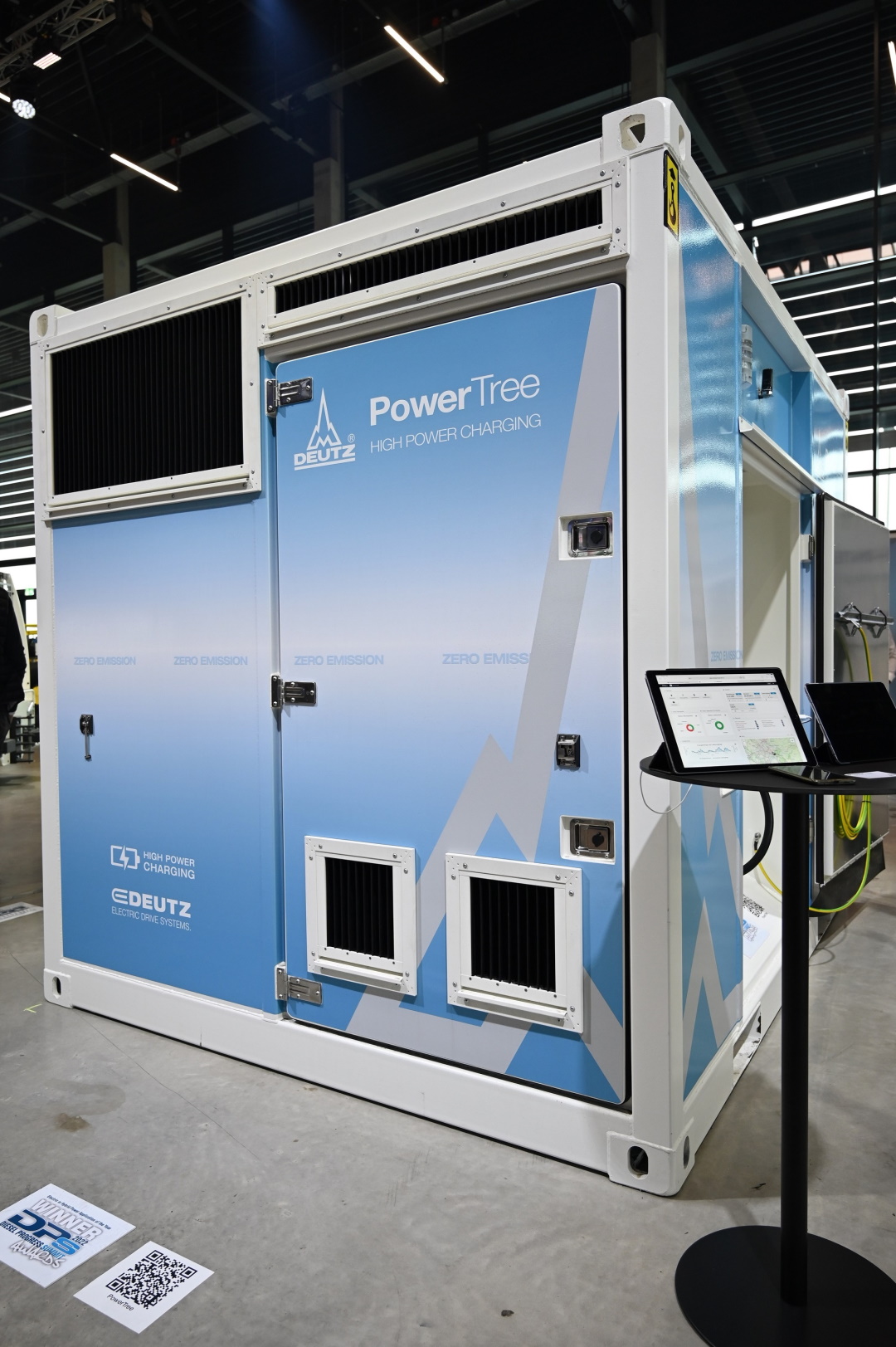 THE POWERTREE IS FLEXIBLE AND EASY TO USE

Installed in a robust 10-foot container, the PowerTree is easily transported to where it is needed. The mobile backup battery with a rapid charging point provides a charging capacity of up to 150 kW – enough to charge construction equipment and tractors during the operator’s lunch break. Using it is straightforward and does not require specific training. All data relating to the charging point and the charging process can be tracked on site using the PowerTree Connect digital app. It couldn’t be easier.

The PowerTree was also a hit at this year’s summit of off-highway experts in Chicago, where it won the Diesel Progress Summit Award in the category ‘Electric or Hybrid Application of the Year’. The next generation of the PowerTree was presented at the DEUTZ DAYS.

In partnership with RheinEnergie AG, DEUTZ is trialing green electricity generation based on the TCG 7.8 H2. DEUTZ unveiled its first marketready hydrogen engine in August 2021. It is carbon-neutral and very quiet and already produces 200 kW of power. The partners’ flagship project got under way this summer when the first H2 genset went into operation at RheinEnergie’s cogeneration plant in Cologne.

The combination of a DEUTZ hydrogen engine and a generator will deliver electric power of up to 170 kilovolt-amperes during the initial six-month test phase. This electricity will be fed directly into Cologne’s power grid. In a second step, the waste heat from the genset will also be captured and used to supply heating. The solution being piloted by DEUTZ and RheinEnergie has huge potential for the local, carbon-neutral supply of energy in urban centers. “We are a utility company for a major city and specialize in concepts for individual neighborhoods and districts,” said Dr. Dieter Steinkamp, CEO of RheinEnergie at the time, during a press conference on June 20, 2022. “An engine like this can help provide electricity and heating locally. When combined with heat accumulators, heat pumps, solar installations, and electricity storage, this technology makes it possible to supply entire neighborhoods on a climate-neutral basis.” The joint pilot project marks an important step on DEUTZ’s journey to volume production of the TCG 7.8 H2, which is scheduled to start in 2024. With an output of around 200 kilowatts, the hydrogen engine is suitable for all off-highway applications. “We are already seeing a lot of interest in our H2 engines from customers across all application areas,” says Dr. Markus Müller.

Together with RheinEnergie AG, DEUTZ is testing stationary emission-free power generation based on the TCG 7.8 H2: 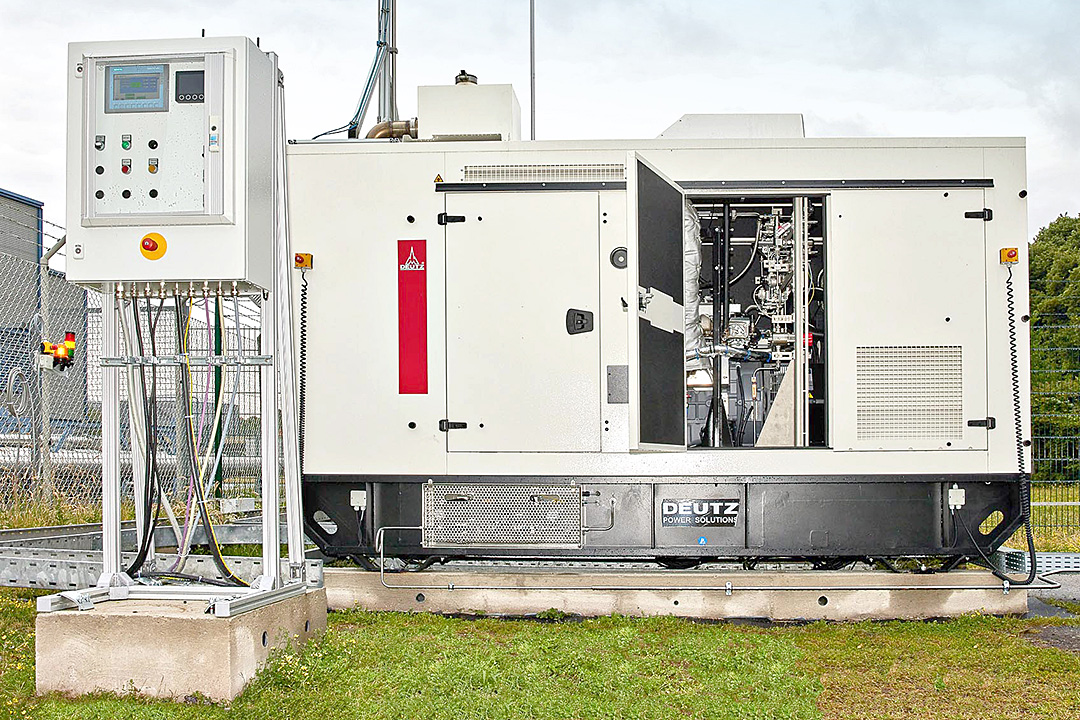 200 KW POWER THROUGH A CO2-NEUTRAL ENGINE

In September 2022, Germany’s Federal Ministry for Digital and Transport approved the funding application for the HyCET (Hydrogen Combustion Engine Trucks) research project. HyCET aims to show how trucks powered by hydrogen combustion engines can make transportation logistics more sustainable. Installed in an 18-tonne truck, the DEUTZ hydrogen engine will show what it is capable of during a series of practical tests. DHL Freight, KEYOU, TotalEnergies Marketing Deutschland, and the Volvo Group are the other companies joining DEUTZ on the project, which is led by the BMW Group. The research will focus on technology development and on the necessary infrastructure such as public hydrogen filling stations. Hydrogen is a promising energy source for transportation logistics thanks to its short refueling times, its ability to transport high payloads, its operational flexibility, and its ability to cover attractive ranges. And if green hydrogen is used, long-distance logistics can also become carbon-neutral.

Starting in 2023, Bergmann Maschinenbau will use DEUTZ engines in two of its dumper models with payloads of six and nine tonnes respectively. The Meppen-based, family-owned business has signed an agreement to this effect with long-standing DEUTZ partner HENKELHAUSEN, who will also handle the delivery. Bergmann was won over by the engines and, above all, by the global service network: “As a manufacturer of premium products, we also expect high standards of reliability and quality
from our suppliers. DEUTZ AG’s extensive service organization was a key factor in our decision,” says Dirk Fasthoff, Head of Vehicle Manufacturing at Bergmann.

At this year’s bauma, DEUTZ presented the first battery-powered concrete pumps made by its partner PUTZMEISTER. The PUTZMEISTER BSA 1005 iONTRON uses a 360-volt drive from E-DEUTZ instead of the usual 2.2 liter DEUTZ diesel engine. The electric drive system has a continuous power output of 40 kW and peak power of 80 kW, generated by two lithium-ion batteries. This allows the pump to work for up to eight hours. The iONTRON concrete pump can also be powered via a charging cable and thus operated longer. PUTZMEISTER plans to start full production in 2023.